Under the Waters of Mexico
by Pablo Bush Romero 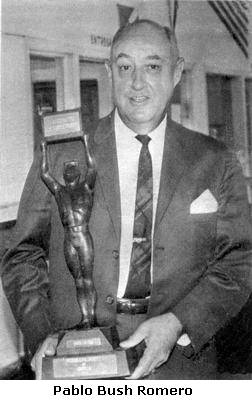 Historically rich, ineffably beautiful, yet at times mortally dangerous, the mere mention of the Caribbean evokes images of romance and adventure.

And it is to these waters that countless soldiers of fortune and modern-day pirates have come, seeking the fabled riches beneath the restless waves-the remains of sunken ships which offer up treasures not only of gold, silver and jewels, but centuries-old artifacts, whose value is inestimable to the historian and archaeologist.

But not all those who search for treasure are interested in self-aggrandizement and personal fortunes, for there are some like the members of Mexico’s CEDAM Club, who are dedicated to serving their country and mankind, in preserving those riches found in the coastal waters of Mexico, in underground caverns, and in the interior, home of the ancient Mayan and Aztec civilizations.

With that noble purpose in view, CEDAM set out on a series of expeditions that are breathtakingly described by the president of the club, Pablo Bush Romero, in his latest book, Under the Waters of Mexico, which provides absorbing reading for scientist and layman alike.

Often risking their lives in adventures as varied as they are exciting, CEDAM’s members not only successfully explored such underwater wrecks as the fabled El Matancero and La Nicolasa, but they went in search of the tomb of the gentleman-pirate Jean Lafitte, uncovering valuable information about this legendary but shadowy figure.

Then, too, they delved into the mysterious underwater cavern of the Inlet of Xeláh, home of the last of those aquatic mammals, the manatees, discovering an ancient altar and artifacts which brought there to the realization that here was the site of a rare Mayan crematorium. And later, risking the murky and dangerous waters of the sacred well in Chichén Itzá, they salvaged a number of articles by ingeniously utilizing an underwater airlift.

All this and more-including their mission to save the life of the aged “Tatich” of the Jungle Mayas forms the colorful fabric of this rewarding and memorable book, Under the Waters of Mexico, in which romantic adventure joins forces with modern scientific techniques to effect a breakthrough in Mexican underwater archaeology.”

An account of Pablo Bush Romero’s life reads much like a Baedeker of adventure, for the author  led an active and varied life dominated by his great love of the outdoors. Photographer, big game hunter, lecturer, explorer, sportsman, writer, businessman-all these apply to him, and one more: humanitarian. For Mr. Romero was a member of many civic and historical associations, and received various awards from such organizations as the Boy Scouts of America, the Tennessee Archaeological Society, and the National Geographic Society.

Born in Mexico City on October 6, 1905, he received his education there. An experienced writer, his articles have appeared in many Spanish and English magazines, and in newspapers of the United States, Canada, Europe, South America and Mexico. In addition to Under the Waters of Mexico, he has also penned My Adventures with Tigers and Lions, Mexico and Africa from the Sight of My Rifle, and The Birth of Mexican Underwater Archaeology. Pablo passed away on August 11, 1998. He lived a very full and long life.

My father had a very rich and interesting life. He enjoyed sharing his adventures with whomever would listen, and often spent hours with friends giving anecdotes of his travels and discoveries. This book is the closest to my heart because it takes place where I have been living for the past 19 years. I consider it a history of my father and what he lived through in the Yucatan. Anyone travelling today to this area would be intrigued by his stories.

I hope you enjoy this introduction and chapter. His book is out of print, but a second edition is in the works. For me, it brings back fond memories, for many who have been coming to this area for many years, it will do the same, and for those just now discovering Akumal and its surroundings, I hope that it provides a new insight into the Yucatan of yesterday!